Excited to announce the release of version 1.5 of the board software package for the Quarto. The Quarto now supports using either of its two serial communication ports and adds the new qCommand library to make it very easy to change variables on the Quarto with text commands over the comm port. See the Serial Commands for Dynamic Control example for a full description. Or take a look at the Lock-In Amplifier example to see it in a real-world example. Also with this release are more Examples in the Arduino IDE for using and interacting with the Quarto.

If you aren't sure what version of package you have, go to Boards Manager in the Arduino IDE and filter for 'qN' and it should show what version you have installed. If you see something like 1.4.0, as shown below, click on upgrade. 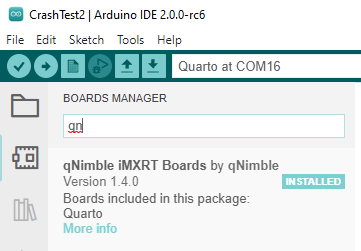